If we live in a simulation, such as “simulation theory” proposes, a computer scientist has a plan to escape.

In addition to all the theories about the universe, and how life could have arisen, there is one that is perhaps a little more far-fetched (or is it?) that proposes that in realityd we are living in advanced virtual world.

Known as the “simulation theory”, in its most basic form – and supported by a branch of science called information physics – suggests that spacetime and matter are not fundamental phenomena. Instead, physical reality would be made up primarily of bits of information, from which our experience of space-time arises.

If digesting this theory wasn’t enough, especially for those who haven’t seen the Matrix movie, theoretical physicist Roman Yampolskiy has also outlined, on top of everything else, in a new article, how could we escape if we were really trapped in a hyper-realistic simulation.

But first we must establish if we are in a simulated universe. To do this, we must go back to the origins of the theory.

In 2003, the philosopher Nick Bostrom, of the University of Oxford (United Kingdom), was the one who formulated the simulation hypothesis, which partly stems from other ideas such as the one put forward by the legendary physicist John Archibald Wheeler in 1989, who suggested that the universe is fundamentally mathematical and can be considered to emerge from information.

Bostrom, for his part, with a more specific vision of how this information emerged, starts from the premise that this is because an advanced civilization should reach a point where its technology is so sophisticated that simulations would be indistinguishable from reality, and the participants would not be aware that they are in a simulation.

So the question automatically arises: if we are not precisely aware of this in a simulation, how then to test whether such a fanciful theory is “real”?

They find in China dinosaur fossil from 120 million years ago: It had a frog in its stomach

A universe full of bits of information

That’s where physicist Melvin Vopson of the University of Portsmouth (England) comes in. In a recent essay for The Conversation, Vopson, in order to put the intriguing theory to the test, puts forward the idea that if we actually lived in a simulated universe, it would bee “would contain a bunch of bits of information all over the place” and that those bits would “represent the code”.

“Therefore,” writes Vopson, “detecting these bits of information will prove the simulation hypothesis.”

Thus, based on his own proposal of “mass-energy-information (M/E/I) equivalence principle”, which suggests that “mass can be expressed as energy or information, or vice versa”, the physicist believes that the bits of information would have a small mass. So if you can find the mass of those bits, he adds, you would theoretically be detecting the bits themselves.

As DW reported earlier this year, Vopson has suggested that information, after solids, liquids, gases and plasmas, could be considered a fifth form of matter in the universe.

And as Vopson himself explains, his experiment to prove its material existence consists of “erasing the information contained inside the elementary particles, leaving them and their antiparticles (all particles have ‘anti’ versions of themselves that are identical, but have opposite charge) annihilate in a flash of energy, emitting ‘photons’, or particles of light.” 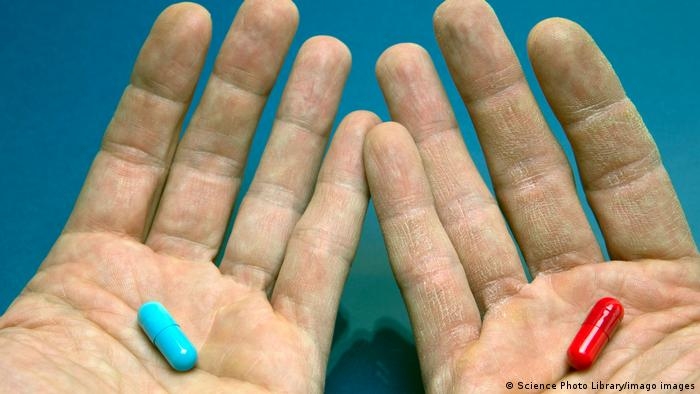 Get out of the “Matrix”

In case Vopson can prove it, and we know we’re stuck in a simulation, how could we get out then?

In a new article, Roman Yampolskiy, a computer scientist at the University of Louisville, tries to answer just that question and suggests some ways out of it. Spoiler alert: none involve the blue or red pills like in the Matrix.

Among several considerations, such as, for example, establishing what type of simulation we are in, Yampolskiy proposes in the first instance to attack with brute force, forcing our simulators to use more and more computing power and therefore more energy, until they no longer they can ignore it.

“Perhaps we could send von Neumann probes to the farthest corners of the universe, in an attempt to deliberately increase resource consumption,” Yampolskiy quotes programmer Gwern Branwen, “or we could carry out our own simulations”, added.

Among the other methods outlined by Yampolskiy, stands out the one of trying to attract the attention of the creators through a gigantic monument in binary to let them know that we know it or that of “hacking” the simulation, although, Yampolskiy admits, so far it is in the first phase of investigating possible ways to escape. And that, in reality, there is still much to decipher.

Thus, for the computer scientist, the next step would be to further investigate the structure of the universe, in particular quantum mechanics.

“Since we currently have no ability to read/write the simulation source code and we don’t know if our attempted social engineering attacks will have any impact, our best bet is to investigate the structure of our universe on the smallest possible scale in the hopes to detect exploitable effects,” he wrote, adding that quantum mechanics has many oddities, which “would make a lot of sense” if we saw them as failures or possible exploitations.

“Such anomalies, alone or in combinations, have been exploited by cunning scientists to achieve what looks like simulation hacking, at least in theory and often in subsequent experimentation (for example, modifying the past, keep cats both alive and dead, communicate counterfactually),” he continued.

“Although the quantum phenomena in question are typically limited to the microscale, it is enough to scale the effect to the macro world for them to count as exploits in the sense used in this article.”

If, after understanding the basic idea of ​​the “simulation theory”, you still consider that it is nothing more than nonsense, it is worth noting that more and more scientists –especially the deeper we delve into quantum physics– who consider, for at least up to a certain level, the theory as plausible. But regardless of which side you are on, what is clear is that the nature of our reality is and probably will remain one of the biggest mysteries out there. In that sense, we still understand very little about the universe and our “reality”, so surely there are still many surprises that we will find on our way.

“The more seriously we take the simulation hypothesis, the better chance we have of proving it or refute it one day” Vopson writes.