The information was published by VGChartz, what performed an estimate of the sales of these consoles between January 8 and December 10, 2022.

With data in hand, the site proceeded to make comparisons between the sales that Nintendo Switch, playstation 5 and Xbox Series X / S in similar periods of the previous years 2021, 2020 and 2019.

VGChartz concludes that it is Microsoft’s platform is the one with the happiest accounts, even though it is the least sold, since it presented an interannual increase of 36.4% (2,530,961 units). These numbers are promising for the Xbox Series X/S, as they indicate that it is gaining ground within the console market.

Another platform that is advancing in sales is Playstation 5, although in a lesser way. The current generation of Sony marked an increase of 5.1% (584,875 units).

Who fell back strongly was the Nintendo Switch, which is experiencing a decline in sales. As much as it is the most consumed platform in 2022, it had an interannual decrease of -20.1% (4,371,791 units).

Despite its annual declines, Nintendo Switch continues to dominate the market share of the current generation of consoles.

Xbox One and PS4 are already on their way out

While there are still plenty of used 8th-gen consoles out there, it’s still possible to pick up new Playstation 4s and Xbox Ones.

According to VG Chartz, In this section, Sony surpassed Microsoft by selling 459,807 units of Playstation 4 compared to 27,433 for Xbox One, being the only two survivors of the last generation. The last to say goodbye was the Nintendo DS, which ended its production in October 2013. 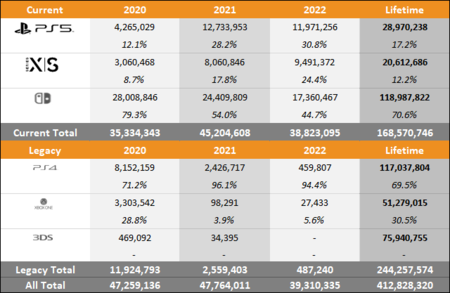