After confirmation of Developer_Direct where Xbox will present its advances and points to be discussed in the field of video games for this 2023, now commits to the environment by launching a campaign where their games, updates and some products will be intended to reduce carbon emissions.

Now our Xbox consoles will have the option of consuming less energy, in order to help reduce the carbon footprint that these products consume, in the same way, These modalities are already well known in the world of PC Gamingsuch as leaving our computers in standby mode when we are not using them.

Xbox power saving mode and how this can benefit us all.

Now the Xbox consoles will have this mode, as explained by the company, The mode “Carbon Aware“, as they decided to call it, will reduce our energy consumption by up to 20%which will help not only to leave a lower environmental impact, but also to lower energy bills. 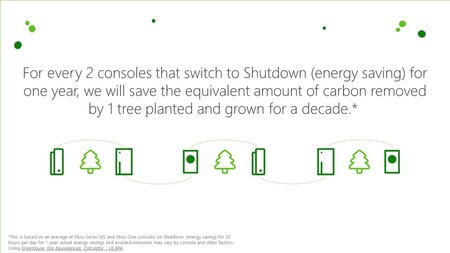 Following this logic, Xbox ventures for the first time in the video game industry to the world of environmental awareness, first, promoting the suspension mode of its consoles, which they comment in their publication, that for every two consoles that are put on hold for a year, the carbon footprint impact of a large tree is reduced for a decade.

We will see if this strategy works for Xboxboth for reducing the impact of carbon, and for establishing these environmental policies that for better or worse are strictly necessary in a world that is increasingly unstable due to climate change, without a doubt, this is also an example to other companieswhether gaming or non-market, who should put these policies in place in a mandatory way.